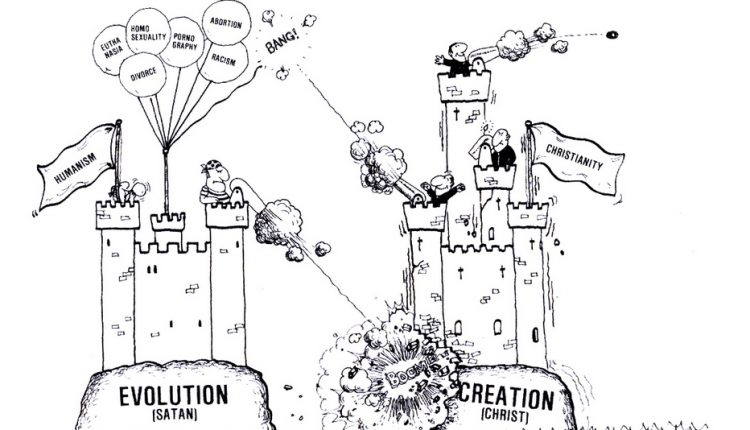 Today I am spreading the word about an important statement: the pursuit of answering origin-related questions is, by example, a ridiculous and futile basis for a life’s pursuit. No one should spend their entire life defining the origin of man, the world or the universe. We should wonder, but know that wondering is as effective as dreaming, and eventually it ends up that it’s all in your head. A fact is defined loosely as, “an indisputable concept that can be proven,” worded differently by institutions like Princeton WordNet. In critical thinking, a fact is a premise that is indisputable and used as support for a claim to show why the claim is either true or false. But how is something indisputable unless it is recorded and able to be experienced in its proven state by the masses? This is the true nature of the battle between religion and evolution.

Dinosaurs and the Bible
by Ken Ham of Answers in Genesis

The above site is written by Answers in Genesis, a non-profit organization (self-defined as a “Christian-defending ministry”) dedicated to denouncing evolution and sponsoring the book of Genesis as factual information about the creation of the world. The article, written specifically about the origins, lives and “facts” about dinosaurs, is one in a series of essays that use the Bible’s first chapter to ridicule the “bankruptcy of evolutionary ideas” that most Christians seem to exclaim. The article talks about how dinosaurs are only 6,000 years old, that they all died off with the Great Flood, and that dinosaurs lived with man based on an animal identified as “behemoth” that was carried over on the Ark which had a similar description as a dinosaur would. The basis of this theory was not much more than scriptures and implied assumptions, though very thorough.

Please don’t smite me, but this explanation is no better than evolution, if not worse.

First, I must insist that evolution is an accepted theory. It has never been given as fact, but it has been regarded higher than religion in terms of origins of life because it has generally accepted scientific studies backing it up. Undo the basis of evolution and other studies such as medicine, industrial design and zoology would be worthless. Medicine uses evolutionary study to theorize medical treatments with animals first, developing treatments to diseases like polio, small pox, hepatitis and tetanus. If evolution was a farce then these treatments should not work with all the evolutionary facts used. Industrial design has used the adaptations of animals to design all sorts of functional objects, from cars to bike suits for the Tour de France. If these adaptations were nothing more than God’s design, our mimic of their functions should, technically, not work, as we were not biologically designed to do such things. We can get into zoology’s basis of evolution, but I don’t have that much time. However, though we have found great results using evolution as a basis of study, we still cannot technically call it a fact.

Creation science, however, is so far from the scientific method that it is hardly going to be included in science texts. The Bible is a hearsay document, one that has been translated over and over by different types of people. The original stories were written in a dead language, translated by individuals hundreds of years later who may or may not have been able to really read them. Then the Bible was translated during the Renaissance to appease the religious masses who wanted to read the Bible themselves. From there, language diversity and interpretations have churned out several different versions of the Bible, each saying it is more accurate. While this is true, the Bible does have a lot to teach us in terms of living a decent, loving and sinless life. It is a book to be lived by example, but to use it as sole fact of science is misleading.

At the very least, creation science should be able to disprove actual science. For instance, the age of the earth has always been a center of contention between religion and evolution. If creation science can claim that, by the Bible’s description alone, the world is only 6,000 years old, they should be able to disprove carbon-dating. In theory, if carbon-dating was inaccurate and incorrect, it should show that bones of a person who just died are thousands of years old, or that testing 20 times comes up with 20 different dates ranging from yesterday to millions of years ago. Carbon-dating is a tested, accepted method of dating different tangibles, used in archeology, paleontology and criminology (carbon-dating bones found to see how old they are in relation to crimes committed, for example). As this is the basis of dating dinosaur bones, the article from Answers in Genesis should give an explanation of why that method is so accurate. That would be a stake through the heart of the evil evolutionary monster.

One must understand that even Answers in Genesis admits that, “Believing in a relatively ‘young Earth’ (i.e., only a few thousands of years old, which we accept) is a consequence of accepting the authority of the Word of God as an infallible revelation from our omniscient Creator.” Many times the organization pushes that we forget outside influence and take the translated Word of God as truth. But we forget that God has never been recorded and replayed. It has been spoken through individuals who probably don’t speak his language. We interpret the “Word of God” in many different ways. But the most prominent fallacy in disregarding outside influence is that religion, in itself, is an influence. It is a belief that is influenced by others. We are not born religious. A baby from India will not biologically believe in Hinduism. So the basis of creation science is that one must disregard all of the other theories in existence to believe it.

We must understand that it is not the facts and truth in our theories but the fact that we theorize that is revolutionary. Truly, we could theorize anything we want, because there is no way to indisputably prove any of it. The world could be only 300 years old, and the memories, thoughts, artifacts and other worldly tangibles are just the creations of God who wanted to setup the chessboard before he played. If someone believed that and their lives were enriched by this belief, the reward for that belief may be identical to that of religion or non-religion. The biological fact, provable in a number of ways, is that ambition is a human trait that affects other parts of our body and life. Look at the difference between one person with ambition and one without. A person with ambition is more likely to live a healthier, more prosperous and more eventful life; a person without ambition is more likely to live a life of poverty, sickness and monotony. This is because our bodies are controlled by our brains. Animals have the ambition to survive, while we have much more: the ambition to survive and be better. The closer we are to the truth, be that God or science or some other theory we believe to be true, the more our brains believe we are on the right path and follow it. The result is the same in that we are given ambition through our beliefs and therefore live better lives.

We need to get past this debate. We need to stop the bumper stickers showing a “Jesus Fish” eating a “Darwin Fish”. We need to stop passing around petitions to prevent evolution study in public schools or promote creation science inclusion in scholarly texts. It all needs to stop so we can include all theories so that they can be debated and accepted as a calibrated basis of fact. I am not proposing that religion is without merit. I myself grew up Christian and still use a lot of that basis for my own belief that God has given us paths to take and that we are not bound by His master plan. He gives us choice, the same as any other living thing on Earth. He has let us evolve and prosper because we have chosen, over the span of our species’ existence, to improve our species rather than just surviving. I have seen a middle ground that makes more sense than any institutional theory imaginable, but it’s because these individual theories are calibrated and compromised into what can be truer than anything: that though we live to find out this complex and meaningful answer to our existence, the answer will eventually be very simple. My belief: we exist because we chose to. But that’s just a theory.